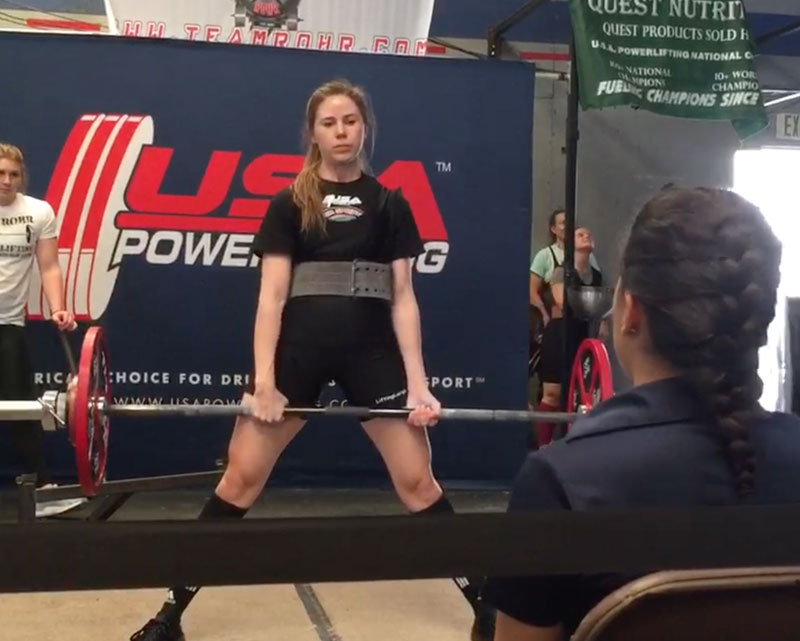 Powerlifting Rules: What To Know For Your First Meet

When I decided to compete in my first meet, amidst my excitement, I realized I knew nothing about powerlifting rules for competition. To make sure I wouldn’t make a clown of myself come competition time, I sought out the help of a coach to prepare me for the meet and got plenty of practice executing my lifts with commands before stepping out onto the platform.

Come the day of the meet I was completely comfortable with all of the commands and with the technical rules for lifts, and as a result I got three white lights for all of my completed attempts. Familiarizing yourself with the commands and standards for each lift, I think, is imperative to performing well in a meet. Making your lifts second nature will help you to avoid mistakes, even when you have excess adrenaline and nerves in a competition environment.

With that, lets take the first step of meet preparation by overviewing competition powerlifting rules for the squat, bench press, and deadlift. I’ve broken each lift down by commands and by form requirements, as well as included a video of successful attempts for each lift.

The commands for the squat are simple: squat and rack. It is of the utmost importance to wait for these commands, otherwise the lift will be judged a miss.

A lifter receives the squat command from the head referee after the lifter has unracked the bar and is standing motionless with locked knees.

A lifter receives the rack command once he or she is standing motionless with locked knees after the completion of the squat.

In order for the lift to be judged a success by the referees, lifters must follow the commands and must meet the technical form requirements. For the squat, lifters must reach a squat depth such that the top of the legs at the hip joint are below the top of the knees. A lifter also may not move his or her feet between the squat and rack commands.

The most common errors for the squat in competition are lifters not reaching the requisite depth in their squat and lifters moving the rack the bar before the referee’s command.

The bench press has the most commands of any of the lifts. The referees commands for this lift are start, press, and rack.

A lifter gets the start command after the bar has been unracked and their arms are straight with elbows locked. That’s the lifter’s cue to lower the bar to the chest.

The rack command is given when the lifters arms are motionless and straight with the elbows locked.

There are several rules to keep in mind for benching in a meet. First, a lifter’s grip must wrap all the way around the bar, with the thumb wrapping. The lifter’s head, shoulders, and butt must remain in contact with the bench at all times. Lastly for the body positioning rules, the lifter’s feet must remain flat against the floor throughout the lift.

The most common errors for bench press are lifters not waiting for the press and racks commands. Just be patient and wait for them!

Then there’s the simplest of them all, the deadlift. The only command for the deadlift is down.

The down command is given after a lifter has reached the top position of the deadlift.

Lifter’s start on their own time in this lift. In order for the lift to be judged a success, the lifter must be in a fully upright position with locked knees and shoulders back at the top of the lift. Additionally, the lifter’s feet cannot move until the completion of the lift once the attempt is started.

Other General Powerlifting Rules To Be Aware Of

Weigh Ins
When you weigh in at a meet you cannot wear your singlet. Expect to strip down to your underwear.

Submitting Attempts
You submit your opening attempts at weigh ins, but they can be updated up to three minutes before the first round of attempts for each lift.

Keep in mind that you can only adjust attempts after the first upwards, so your opener should be something you can handle with confidence.

Time Limit For Beginning An Attempt
Once the bar is loaded for a lifter, they have one minute to begin their lift. If the lifter does not begin their lift within that minute the attempt will be missed.

I hope this makes powerlifting rules accessible and less intimidating for lifters looking to compete. If anyone wants more in-depth details on the whole gamut of regulations, check out the USAPL Rule Book.

If you have any questions or feedback, feel free to write a comment!